Eliminate Background Noise In Your Audio

We have all heard how conversations from noise canceling microphones and headsets sound. While they do help the caller’s voice rise above the clatter, they tend to make voices sound robotic or muffled. Those technologies mainly assume that the loudest sound coming through the microphone is the caller’s voice and that the quieter ones are background noise. To compensate, they simply apply an equalization effect to reduce the volume of the quieter frequencies. Krisp developed a smarter way.

Krisp is using Artificial Intelligence (AI) to recognize the wav form of the caller’s voice and has wav forms of thousands of the more common background noises heard on thousands of hours worth of phone calls. The software matches the sounds to isolate the sound of your voice from the other noises on the call. It really works!

As of the writing of this post (Jan. 18, 2020) this software is only available for computers (Mac & Windows) but not mobile phones. My guess is that the intense processing involved in matching a cacophony of noises to a library of sounds to intelligently isolate your voice in real time is a battery draining process that’s going to require serious optimization. Plus, it would require a lot of storage since all of those sound patterns are stored locally on the device. And, my guess is that developing such an app for phones could be more difficult as a result of different phone manufacturers having their own proprietary onboard audio processing. I hope they have an Android version released soon, I’m sure they do, too, since computer audio is just the tip of the market iceberg.

For myself, the greatest use for this software is for making recordings for podcasts and commercials in my office. My home office is fairly quiet, but my big fat liquid cooled desktop PC still emits a low hum from its cooling fans and spinning hard drive. I’m hoping Krisp can eliminate that hum to save one step in post production. Also, longer recording sessions run greater risk of being interrupted by the racket of a garbage truck driving past the house, or the sound of my family not expecting me to treat the house like a professional sound studio.

The theoretical possibilities for using AI on audio run deeper than eliminating noise from calls and podcast recordings. Once you can isolate the sound of a person’s voice, a specific person’s voice, it seems reasonable to assume that you could someday apply filters to modify that voice. For one thing, suppose you are talking into a cheap headset, but would like to make your voice sound like you are using a much more expensive studio microphone. Maybe the AI will be able someday to recognize the audio characteristics of whatever headset you use and masterfully remix the audio to mimic the characteristics of any of a collection of microphones in its library of filters.

Something else I would like to hear in AI noise reduction software is to cancel the lip smacking, nasal, and breathing noises that result from having a headset microphone placed so close to the mouth. When we talk to people around us, we rarely notice those juicy or windy noises. They don’t sound natural. If the person’s mouth was an inch away from your ear, aside from the situation being either really intimate or weird, you would notice that they sound different. AI should be capable of recognizing such unnatural audio characteristics to make it sound like you invested a lot more in your sound studio equipment than you actually did.

Here’s a wish list of improvements I hope to see in Krisp:

Download krisp for yourself through my affiliate link. Understand that the money wasn’t my motive for writing about this. I wrote about it because I’m amazed by how well it works. 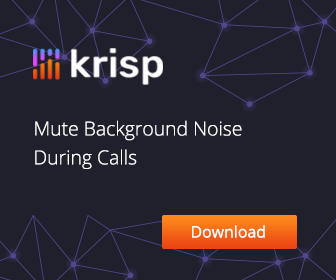 It’s free to download and use to eliminate noise in inbound calls. The paid version cleans up audio for your outbound calls. Knowing that we would be referring a lot of people to this awesome software, this is our affiliate link.